Serai Puzzle is yet another neat little brainteaser from NZP, maker of excellent freeware solitaire and puzzle games for Windows. Your goal in this one is to move the numbered tiles to arrange the numbers in order. The catch: you have to do it within the number of moves allowed by the game. Like NZP's other brainteasers such as The Bird Cage Puzzle, Serai Puzzle will challenge your brain cells for a while, but once you have solved it, there is little reason to replay (other than to impress friends and family, perhaps). But the crisp graphics, intuitive interface, and challenging premise will likely keep you occupied for more than a few coffee breaks. It took me several tries. 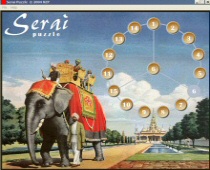