In 1989, Apogee released two "Fun-Paks," Adventure Fun-Pak and Puzzle Fun-Pak, priced at $10 each. Each "pack" contains 4 games that were submitted to Apogee by outside authors, although most of the games were designed by Apogee's Scott Miller. Most of these games are ASCII-only games with minimal or no graphics, some more interesting than others. Since the packs were never released as freeware or shareware but sold direct from Apogee, they are two of the few commercial titles published by the shareware giant. 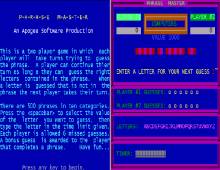