In this novel puzzle game, you must maneuver MSB, a maintenance droid, around the damaged ship Rasterscan to avert the impending crash with a nearby star. MSB must solve numerous logic puzzles to gain access to other areas of the ship. Most logic puzzles involve eight blocks arranged in an octagon, in which you have to swap the colours about until all of them are yellow. It's nowhere near as easy as it sounds, and once you've started the puzzle, you can't exit from it until you've finished. The digitised graphics may be impressive, and the music really increases the sense of loneliness, but most of the puzzles give Rubik's cube a run for its money. Don't be fooled by the game's simplistic controls and small size: it contains enough devious puzzles to stump you for a while. 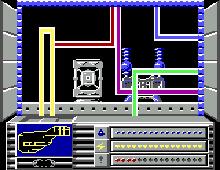