Puzzle Pits is an excellent, albeit relatively unknown, puzzle game that was criticized so heavily by most "professional" game critics that its shelf life was miserably short. Reading some of the reviews, however, I can't help but feel that critics who are assigned to review small games are those who are neither experienced gamer, nor willing to invest the time required to form a well-informed opinion on the game. GameSpot's reviewer, for instance, spends most of her review to criticize the game's dated graphics and lack of sound effects. Just when do these things matter in a great puzzle game is anyone's guess.

Anyway, I found Puzzle Pits to be an enjoyable, challenging gem-- although the game has some rough edges. You play an apprentice who is on a mental journey. At the beginning of each level, your master, Flosh, gives specific directions on what you need to do to move on to the next level. The game is played from an isometric perspective, and resembles Chip's Challenge most of the time. You will push crates to form a bridge, activate magical gems and switches, negotiate one-way arrows, and avoid a host of hazards on your way to the exit. The game introduces new dangers and objects every few levels, so it never becomes repetitive.

In short, Puzzle Pits will appeal to puzzle lovers of all ages, especially anyone who loves challenging puzzle game. It may not be revolutionary or even ingenious, but it does provide some tough challenges to test everyone's mental prowess. Best of all, publisher Plasma Works has released the game as freeware, so there's really no better incentive to try it out :) 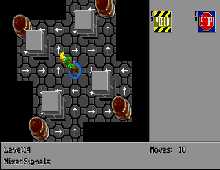 People who downloaded this game have also downloaded:
Word Crazy, Lemmings 2: The Tribes, Quadrax, Puzzle Gallery (a.k.a. At The Carnival), Marble Drop