Pamidama is a fun reflex-based puzzle game featuring characters from several anime series. The idea: catch all the balls that roll from the top of the screen in the right container whose color matches the ball's color, by switching two containers at a time. It is not hard to predict each ball's trajectory, because it always takes the new path at every fork in the pipe. Sometimes you still have to guess if it will go left or right (at crossroads for example), but usually you will have enough time to switch the containers in advance.

Similar to Tetris, the action in Pamidana gets more frantic on higher levels as you progress. Similar to many console-based Tetris clones, you can compete against another human player or the computer. Many power-ups allow you to attack your opponent, and other bonuses either increase your score or help your task. The animated bar in the middle of the screen shows the balance of power between you and your opponent, so you always know how close you are to winning or losing.

Excellent anime-style graphics, fun gameplay, and good options make Pamidama a Top Dog in my book. The game even has different difficulty levels you can choose from: the easiest level is a good introduction to the game as it highlights the path each ball will take, so you can arrange the container well in advance. If you're looking for a nice Tetris-style puzzle game, check out this fun freeware from Japan. 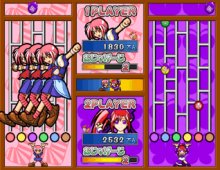