Murder is a curious little game, which is loosely based on Cluedo. What started out as a typical dinner party, has ended up with some poor soul being murdered. You are the budding super-sleuth, and your task is to figure out who the murderer is, with which weapon and which location.

That is as far as the similarity to Cluedo goes. The game itself is a real time 'puzzle/adventure' where you wander the mansion, speaking to people, examining objects and collecting evidence. Compare fingerprints, cross question other guests etc..

Murder is an enjoyable little game, particularly as on the harder levels, the relationships between the characters can get quite complex. What with guests involved in arguments, others having passionate affairs, and some even in love triangles, youll have fun figuring out the motives of each character.

Needless to say the game is different every time.

A fun murder mystery that resembles boardgame classic Clue! with real-time elements thrown in, Murder! puts you in the shoes of an investigator who must solve a murder case in a big mansion and arrest the killer before he or she strikes again. The game is played in real-time, which makes tracking down characters to interrogate within the time constraints may prove frustrating.

Murder! can be quite compelling, as there is a wide scope for detailed questioning. You can also take fingerprints from possible murder weapons, and try to figure out what the weapon was. In fact, you need this to win the game, because to win, you need the murder weapon in your possession, plus you must accuse someone who you think might have committed the crime.

If you're a fan of spy novels, the game may indeed be worth your while because harder levels can be very interesting. For instance, characters might lie about themselves, or be involved in supposedly "secret" love affairs with other characters. For all of the game's attention to detail, however, sometimes the levels can be solved within 30 seconds by sheer luck: just find the nearest weapon to the scene, speak to the nearest person to find out who had a motive to kill the deceased, and accuse them - very often this turns out to be correct! Of course, this really isn't the correct way to play the game, and die-hard sleuths will cry "foul!" But the fact that you can "cheat" in this way reflects a poor design. Overall, if you enjoy spending a lot of time questioning suspects, trailing people etc., and can tolerate a cumbersome interface, then you will probably enjoy this game. 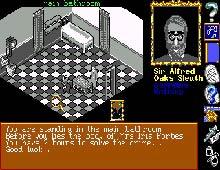