Oh, those crazy Japanese console programmers. What will they think of next?

Right, according to the intro, "the town" is being "overrun by coloured blocks" and only Mr. Driller can stop them. There are also some little blue creatures, presumably they're doing something with the blocks…

Well, so much for the plot, this is a puzzle game, along much the same surreal, nonsensical lines as Tetris and Puzzle Bobble. So the plot's about as much use as a giving a fish a bicycle, and probably made sense when the programmers were on the amount of crack that spawned the game's graphics.

Anyway, you play as Mr. Driller, and you, unsurprisingly, have to drill to the bottom of these coloured blocks in a somewhat Tetris-like manner. The screen is filled with blocks, which can be any colour, and there can be either two, three or four colours of block in each 500ft stack of blocks. If two blocks of the same colour touch, they will blob together in a Robotnik's Mean Bean Machine sort of way, often resulting in large, strangely-shaped blobs..

Mr. Driller can drill in any of four directions (up, down, left and right, for the hard of thinking), and is affected by gravity, so when you drill downwards, you fall to the next level. Drilling through a block takes a single press of the drill button, and will destroy all the blocks of the same colour that are touching the drilled block. This is made perfectly clear to you when you start the game because you have to drill through several layers of single-coloured blocks in order to reach the great mass of blocks below you. So, you drill down through blocks, drill big holes through big blocks, and get to the bottom. Simple once you've grasped it.

Now it gets a little more complicated. Mr. Driller has a limited air supply, so you need to replenish it on a fairly regular basis by collecting the conveniently placed (by who, what or when, we don't know, but hey, it's a puzzle game…) oxygen bottles on your way down. Usually, these bottles are surrounded by dark brown blocks, which causes a few problems, as these blocks take several drillings to get through, and also (inconveniently enough) take off a full bottle of air if you drill all the way through them. Good thing it takes more than one drilling to get through them, really, isn't it? Usually it's enough just to drill down one side of the brown blocks, where there will be an unobstructed access to the air bottle, but as you get further down, you find more blocks, so some tactical drilling is in order. Once you've collected an air bottle, and got yourself a new tank of air, you might take a moment for a breather… Do this and the brown block which was above the air bottle (now no longer supported) will flatten you with a "hilarious" squelching noise, resulting in a dead Driller…

Did I forget to mention gravity? Sorry. But gravity throws up some interesting quirks to the game.

First of all, if you need to change direction in your tunnelling (brown blocks again), you might have an unsupported block above you, which will, after a few seconds, plummet towards Mr. Driller's, sadly unprotected, head. Sometimes, your only choice is to quickly change directions again and hope for a more anchored block above you. On the other hand, if the block passes another block of the same colour on its way down, it will be "caught" by merging with it, as mentioned above.

More complications. If the plummeting block is "caught" by a block which is already made up of three blocks, the new block of four will spontaneously disappear, most likely causing some more blocks to fall from above, often causing a chain reaction. This can get especially hectic in the sections with only two colours of block, which, in extreme situations, can make you fall all the way to the bottom of the section without having to drill more than once or twice.

All this combines to make one of the most compelling, addictive and downright fun games since Tetris. Like Tetris, it has a simple concept, is easy to get into, and will have you hooked for many, many hours as you try to beat your last record, whether that's level 2 or level 20. There are several modes of game, ranging from the standard Arcade mode, where you have to drill down 2500 feet (5 levels), or even 5000 feet (10 levels), Survival, which lets you drill as far as you can in a single life, and Time Attack, which gives you some quirky challenges, replacing air bottles with extra seconds as you try to beat the stage record. Great fun. 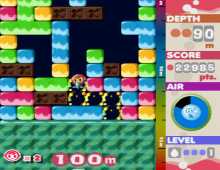