MisAdventures of Sir Randolph Doogleberry, British Explorer (MASRDBE in short) and Sensitive are two fun turn-based puzzle games with similar concepts: move over each tile exactly once to make them disappear or fall away before you can exit each room, or until only one tile remains. MASRDBE is an original game from freeware group Acoders, while Sensitive is a good remake of a shareware game that was available only on Commodore 64. Naturally, as a newer game, MASRDBE is more attractive in terms of graphics: SVGA graphics bring out nice details, especially the Egyptian patterns in each room, and Sir Randolph the protagonist is well drawn and animated. Sensitive features simpler but still-adequate graphics, as well as the original tile graphics used in C64 version if you are feeling nostalgic. Sensitive might be more annoying to puzzle fans because you can roll off the tiles and into your doom. If you like turn-based puzzle games that are very easy to learn but challenging to beat, both games come highly recommended. With 45 levels in MASRDBE and 60 in Sensitive, they are sure to occupy your puzzle-solving time for a while. 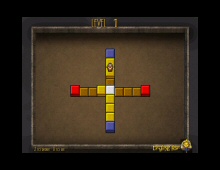