Klax is an old game from Commodore 64 and Amiga and this is Domark's PC version made in 1991 (the original game was made in 1990. Klax has rather easy rules - collect the bricks that roll from the top screen with a paddle and drop them down in order to form triplets. As soon as three bricks of same kind are in the same line, whether it's horizontal, vertical or diagonal line, they will disappear (this is called Klax) and make more space for the new bricks. Each level has a minimum number of Klaxes that you must make in order to advance. Klax is a good game. Puzzle gamers that love Tetris, Pentix and other similar games will like Klax as well. I played it again a bit and ended glued to my computer for about 3 hours!

An ingenious concept. At the time this game came out it was celebrated as the worthy successor to Tetris. The subject of this game is to build "Klaxs", which means a vertical, horizontal or diagonal line of 3 or more blocks of the same color. Those blocks come rolling down and with your tray you can hold some of them (number depends on the level) and drop them where you need 'em. This sounds pretty much like "4 in a row", but there's more to it - you get different objectives like "build 5 Klaxs", "create 3 diagonals" or "survive 40 blocks". There's even a 2-player-mode in the game.

Back in the late Eighties, Atari Games lost the Tetris license to Nintendo. Rather than admit defeat, the company instead set out to out-Tetris Tetris with a brand-new tile puzzle game for the arcade titled Klax -- a design that obviously borrows an element or two from the popular Russian puzzler while adding its own unique flair into the genre, especially the nice isometric/3D perspective.

You're presented with a stationary table spanning out in the distance. Up close, you take control of a paddle that can move to one of five positions. Colored tiles flip from the far end of the table and creep towards you. The idea is to maneuver your paddle, collecting these tiles, then flipping them into the bin below in one of the five positions. Connect three of the same colored tiles up, down, or diagonally (called a "Klax"), and they'll disappear, settling the rest of the tiles deeper into the bin. Each level has a specific criteria to meet so you can advance to the next level -- some require you to form a set amount of Klaxes, others require you to capture a defined amount of tiles on your paddle. And in others, you'll have to score a certain amount of points. It's a lot of fun, and extremely addictive-- a must-have for all action/puzzle lovers.

Rob's original review from when the game was at CW#3: Decent conversion of Atari's excellent arcade game from 1989. Of course, a Euro frog (what's that?!) like me 8] tells you stories about the absence of the cool music, speech and sound effects found in the Amiga and Atari Lynx conversions but... ahem, it's a puzzle game, addicting, fun and the only computer game my sister liked a bit - the Atari Lynx version that is. 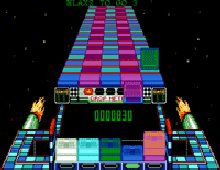