Hosen is a nice freeware puzzle from Japan that offers an innovative twist to Pipe Mania and similar games. Instead of connecting pipes together to channel water to the destination, your goal in Hosen is to connect rails of various shapes to establish a route that will take the train to its "goal" tile. As in Pipe Mania, you are shown the next piece of rail(s), and must put the piece somewhere on the board. The game is quite difficult, especially because there are many "crossroad" tiles but not many "rebound" rail (i.e. a piece that makes the train turn back once it hits the dead-end, instead of crashing) to "plug" these new routes with. If you're looking for a good reflex-based timewaster to spend a few minutes with, try Hosen. This download includes a zip of Rails, the author's previous game that is similar in concept, except you are given all the rails at the beginning of the game and must move them one by one (like in sliding tile puzzle games) to make the correct route. 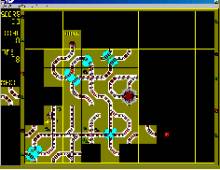