HamsterJam is a superb Windows remake of Commodore / Spectrum ZX game called Rockman, originally released by Mastertronic in 1985. As the official site explains, "...the idea of the game is to collect all the rings from each room while avoiding monsters, skulls and the deadly boulders. Upon completing a room you can leave by any exits available to you to move on to the next. You play Sniffles in the HamsterJam remake, and the monsters are mice intent on stopping you from getting to their precious treasure. The original maps and rooms are still there, along with the unique boulder gameplay, but now with bright, colourful cartoon graphics to bring it into the modern age." HamsterJam is similar to the likes of Boulderdash, but with a more varied gameplay thanks to many "special" rocks and bonus items. Your objective is to collect all of the rings in each room. Rings will not fall, but boulders may roll off them. When you have collected all the rings in a room, you can go through an exit to the next one. Complete twenty rooms, and you will beat the game and can submit your high score to the makers' official site.

The behavior of boulders and existence of skulls and mice give HamsterJam a unique and challenging gameplay that is quite different from Boulderdash. Boulders will roll off other boulders, rings and skulls if there is nothing to the side that hold them in place. They may sometimes split into two if they fall and land on other boulders. In addition, there are skulls that block your way and are deadly to the touch; they can only be destroyed with rings if you have collected enough of them. You must also run away from the mice, or turn them into jam by dropping a boulder on top of them. Each room has a time limit, so you must be quick on your toes.

Freeware coders at Ovine by Design have done a great job converting this 8-bit game for Windows. The levels and gameplay remain the same, but now are more attractive than ever with the addition of SVGA graphics and sound effects. The interface is very intuitive, and the animations are very smooth. A good mix of arcade and puzzle fun, HamsterJam comes highly recommended to anyone who loves Repton or Boulderdash games. 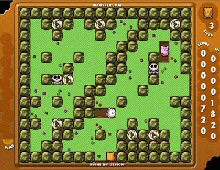