I'll let MobyGames' excellent rap sheet for this great action/puzzle collection speak for itself: "Future Classics Collection is a collection of five distinctly-themed, well-balanced games that stress action and strategy equally. Future Classics was created by past developers from Cinemaware and Microprose. The gameplay of the five games is extremely varied:

DiskMan: Backup your computer disks; collect as many disks as you can, avoiding all hazards along the way and inserting the disks into the disk drive to open the exit to the next level. Tankbattle: Work your way across a battlefield to capture the opposing coat of arms to open the exit to the next level. Avoid turrets, bombs, and other obstacles. Lost 'N Maze: Quickly travel through the corridors of the maze until you locate the keys to the exit. Collect various power-ups and bonus points along the way. Diet Riot: Put all the junk food stores out of business by having your man gather all the food crates for each store and throw them in the dumpster. Beware of junk food -- eating it slows you down and threatens you with a heart attack; you can "work out" using the exercise equipment to speed back up, as well as eating healthy food. Blockalanche: An isometric-view Tetris clone, with the differences of being able to select your next piece (if you're quick enough) and being only able to rotate your block around one access.

The gameplay options are also quite varied: Each game can be played one player alone, two players alternately, two players simultaneously, or one player against one of three computer personalities -- including split-screen play for head-to-head competition." 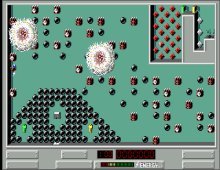