In a strange but fortuitous departure from its stable of RPG classics, Sir-Tech released this enjoyable puzzle game that's best described as Diggers meets Pacman: your job in each level is to clear path to discover keys that will unlock doors to the next level while avoiding evil fuzzballs and traps. The clever twist is that the path you cross can only be traversed *twice*, after which it disappears. Hence, planning your patch is crucial to success, especially on later levels of the game. Overall, a fun little game that won't tax your brain cells. 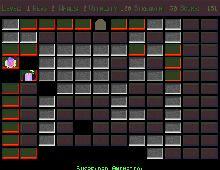