Egyptia: Secrets of the Lost Tomb

Egyptia is a very obscure puzzle game from German developer DOE Entertainment. Your goal is to navigate dozens of rooms inside a pyramid to uncover the hidden gold of the Pharaohs. The game plays like a cross between Lode Runner and Montezuma's Return, but the result is much less fun than either game. On each level you must get to the exit while running on and jumping over tiles in the right order. Skeletons, scorpions, and more dangerous creatures abound, forcing you to think quickly and move precisely.

With shifting tiles, obelisks, and runes that have to be figured out, Egyptia is far from easy. Unfortunately, the layout of most levels are boring, and once you beat the first 10 levels or so, you will have a good idea of what the remaining 50 (making 60 in total) levels will be like. There is very little surprise along the way and, unlike the likes of D.R.O.D., most levels rely more on menacing monsters to provide a challenge, rather than ingenious designs. Drab graphics and uninteresting background graphics round off this mundane game that deserves its obscurity. Not recommended. 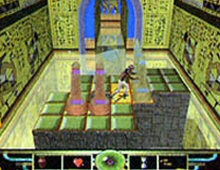