One of the most addictive time wasters I've ever come across, GAMOS' Color Lines is a wonderful puzzle game that, similar to Tetris, is very easy to learn but hard to master. The idea, as described on the official site, goes as follows: "game field is a square divided into 9x9 cells on which balls of different colors appear every once in a while. Your goal is to reach the maximum score and to capture the Main prize - the Golden Crown of the Champion. Points are given every time you manage to remove some balls from the field. Only horizontal, vertical and diagonal lines consisting of 5 and more balls of the same color can be removed from the game field. You can create such lines by moving the balls around the field. A ball can move along vertical and horizontal (but not diagonal!) lines if no other balls stay between its initial and destination cells. Jumps over other balls are not allowed. In one move you can transfer only one ball regardless to the length of its path. After your turn, three more balls are dropped onto the field (their colors and location are random). Thus, every next move is going to be more and more difficult for you! But if the result of your move has made a line disappear, the next portion of balls will not appear immediately."

Sounds simple, right? This cross between Othello and Tetris is maddeningly addictiveóand the best thing is, you don't need good reflexes to master it, unlike "pseud action" games like Tetris. Try it outóyou will be pleasantly surprised by one of the best puzzle games ever made, and a wonderful way to waste time at the office ;) 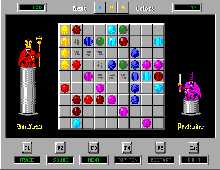 People who downloaded this game have also downloaded:
Cities, Clone, Atomic, Columns III: Revenge of the Columns, Breakthru! For Windows