Catast is a fun reflex-oriented action/puzzle hybrid that plays like a cross between Breakout, Tetris, and Laser Light. Your job is to move a cute anime creature called Mirmy around the screen, avoiding falling blocks while shooting at blocks to break them. A typical block has arrows on it to indicate the direction of chain reaction that will occur once you hit it with a bullet. For example, if you hit a block with up+down arrows, the block will hit the block on the top of it before disappearing. If this second block has left+right arrows, it will hit blocks to the left and right of it. In this way, you can cause many rows of blocks to disappear at once with a very big chain reaction. Naturally, you get a much higher score from big reactions than small ones.

There are also special blocks that turn into special items once you hit them. These can boost your speed, destroy an entire row of blocks, or shoot a column of flame. A gauge in the bottom of the screen lets you monitor how close you are to catastrophe - that is, when your Mirmy will be pushed "off" the screen by falling blocks. The action is nonstop, and having to avoid falling blocks adds an extra layer of challenge to the game.

If you enjoy games that require both reflex and quick thinking, Catast fits the bill. It is challenging and fun, although the sheer number of blocks may become overwhelming on higher levels when the blocks drop extremely fast. Recommended, especially to Tetris veterans who want a tougher game. 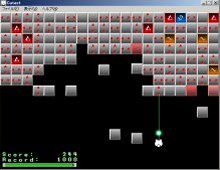 People who downloaded this game have also downloaded:
Adventures of Robbo, The, Breakthru! For Windows, Columns III: Revenge of the Columns, Even More Incredible Machine, The, Deflektor