A fun game in the spirit of Origins' OMEGA and other programming games, AT-Robots (short for Advanced T-Robots) is a fun and educational game that tests your programming skill by pitting the robot you programmed against others in a battle to the death. You program your robot with a language called ATRA (Advanced T-Robot Assembly), which is similar to assembly language on the PC.

Programming the robot is quite simple if you have prior knowledge of assembly. For those without any programming knowledge (like yours truly), the learning curve is steep but not overly so because the language is quite logical. Your robot has a drive system, some armor, and a turret that houses a scanner and a weapon. The weapon generates heat, which you will need to regulate. The scanner has a specific arc in which it can detect an enemy. Therefore, the trick is to handle all of these aspects of the robot effectively and efficiently to kill the opponent robots. Originally released as T-Robots in 1991, the game was inspired by David Malmberg's P-Robots, which was in turn inspired by Tom Poindexter's C-Robots. AT-Robots features a small amount of commands, thus making the game much more accessible to beginners than its predecessors. The game is a great way to learn the basics of programming and logical thinking, as you need to figure out how to write subroutines for different parts of your robot, and string them together with simple commands. Definitely a must-have for anyone who is interested in robot games or programming in general. Originally shareware, the author has kindly released the latest version as shareware in late 1990s. Highly recommended! 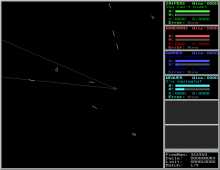