Russian developer Nikita released a number of budget arcade games for Windows 95 in 1995, none of which is well known outside Russia. Similar to older games by CHAMProgramming or Windmill, Nikita's Windows titles are essentially clones of well-known arcade classics such as Donkey Kong and Missile Command. Escape, U-95, and Floppy Killer are three entries in this series. While none of these games break any new frontier in PC gaming, each game is well-coded and easy to learn, offers pleasant 2D graphics, and serves as a fun diversion for a few minutes. Escape is a decent Donkey Kong: climb ladders while jumping over bombs, bullets, and other obstacles on your way to the exit. U-95 is similar to SubHunt: maneuver your submarine through the levels, shooting hostile sea creatures and be careful not to hit any part of the underwater cavern. Floppy Killer is a decent Missile Command clone: move the PC left and right to shoot enemies overhead while protecting your bases (in this case, computer users) below. All three games are in Russian, but you shouldn't need to read anything in order to play. Worth a look if you are looking for some quick and mindless fun to while away a few minutes at work. 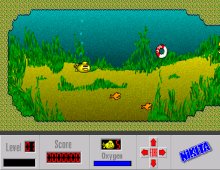