One of the most simple yet strangely addictive games I have come across in quite some time, Pendulumania is a very unique game that will keep you glued to the screen, oblivious to everything else ;) Well, maybe not really - but this is the first "coffee break" game in a long time that seriously hampers my productivity at work.

The concept of the game is unique, but it is not hard to learn. You basically control a metal ring that has a round weight attached to it by a small piece of string. The weight moves around the ring like a pendulum: it swings back and forth, and there is no stopping it. You can only slow it down by moving the ring slower across the screen or stop moving it entirely. Your goal is to hit balls of various colors that pop up randomly across the screen with the weight. You score more points if you manage to make "combos," i.e. hitting balls in quick succession. But the game is not as simple as it sounds: you must closely monitor the "tautness" of the string. Swing the weight too wildly or quickly, and the string will snap into two. When the string snaps, it's game over. The color of the string as well as the "tautness bar" at the bottom of the screen help you keep track of how taut the string is. If the string becomes pink, that means the strain is getting too high. If it becomes red, it takes only mere seconds after that for the string to snap.

Like all good arcade games, the appeal of Pendulumania is hard to pinpoint. The graphics is merely okay, although the soundtrack is much better than average. I think it must be the simple interface (only mouse movements are required) combined with neat gameplay that keep me addicted. For whatever reason, you definitely won't regret trying out this little game. Just be warned - it could ruin your productivity! 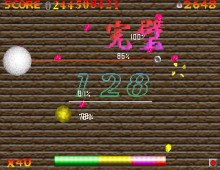