Nantonaku Majyan is a fun freeware Japanese Mah Jong game for up to 4 players, any of whom can be computer-controlled. If you have never heard of it before, multiplayer Mah Jong is a popular tile game that widely played in Asia. The Japanese rules this game uses are actually popular in Nordic countries, or so I've been told. The gameplay is essentially the same as Hong Kong Mah Jong: get rid of all your tiles by matching them up with others to create "melds", similar to card games Poker and Rummy.

This computer version of Japanese Mah Jong is quite solid, with competent AI, good graphics, and very comprehensive statistics keeping. You can see not only simple win/lose records of your games, but also detailed statistics on each type of hands you have scored. Each computer player has his/her own playing style, with playing skills broken down into several categories. If you enjoy Mah Jong in general, Nantonaku Majyan is well worth a look. Unfortunately the game is in Japanese, but you can learn the rules of Japanese Mah Jong by browsing the excellent Mah Jong for Dummies site, and it won't take long to figure out what each menu item means ;) Recommended! 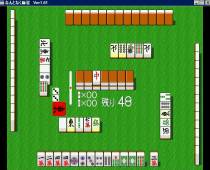 People who downloaded this game have also downloaded:
Mahjong House 2, Where in Space is Carmen Sandiego?, Isle of Four Winds - Rune War, Rummi