The third game in Ralf Glau's series of management simulations, following Hanse and Vermeer. All game texts are in German.

This time the game is set in the 60s, in the world of drilling rigs, oil fields and amounts of money that can easily reach the eight digit mark. The year is 1960, mismanagement has brought the biggest American oil concern into the situation of having to declare bankruptcy. The general meeting's decision is clear: The whole management staff is fired. The new strategy: The company is divided into four parts and this year's four best Havard graduates should each get the chance to manage and reorganize a part of the company.

This is your chance! Success and fame are just one "small" step away...

Up to four players can take part in the game, as usual trying to be as successful as they can in managing their company. So you will be jetting around all over the world, buying land which seems to be rich of oil, building drilling rigs, shipping oil by sending huge tankers over the oceans from the oil fields to you home offices in New York or Rotterdam and then selling the energy containing liquid. That's basically it. A bit limited. Of course, there are a few other aspects worth mentioning: The money you earn has to be spend carefully either in new oil fields or new (bigger) tankers or in shares of your own and your competitors' companies. If you prefer the not so legal ways of gaining success, you also have the option to sabotage your competition. Your health and reputation are also of importance in this game and have to be taken care of. There are no computer players, so the already not so exciting experience is even more so boring as a single-player game.

Yuppi's Revenge is enjoyable for a few hours of gameplay if you plan to play this game in a group of two or more people, but it offers too few variations and interesting decision making to be a very good game of its kind, especially as a single-player game. However, with its limitations it might be of interest for people without any experience in the genre. 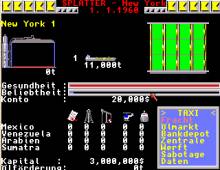