Typogun is a fun and very professional-looking freeware typing game - a rare breed. Putting a unique twist on the overhead action genre, Typogun puts you in control of a stationary ground terret that must defend itself against an onslaught of enemy units. You 'destroy' enemy units by typing the correct word or clause that appears on top of them, similar to The Typing of the Dead. Some units take more than one hits to die, and some can shoot you from afar instead of just running into you. Each new "phase" brings more units that are faster and tougher, as well as units that can shoot, so you need to type faster and faster. The game is over when your turret runs out of health.

There are many neat features that make Typogun more enduring than it may sound. Enemies often leave behind power-ups such as "TimeFrost" (freezes time) and "Wrecker Gun" (more powerful gun) that you can collect the same way you kill enemies: by typing the right word that appears on top of them. Stages are arranged by vocabulary type, ranging from "simple" to "country names" to "vocabulary II" which have the hardest words. The vocabulary I and II levels are great because they show the definition of the word you are trying to type - a fun way for exam preparations ;) Too bad these levels have very few words - only about 30-40 each. This means the words recycle quite often. My overall favorite level is "left hand strain," which has a wide range of words that only use the left hand side of the keyboard (mostly words that have a lot of A, E, R, S, and T in them). In each stage, your objective is to survive as many "phases" as possible.

Typogun sports very crisp, professional-looking graphics and sound effects. It even has two very nice MP3 tracks, to which the author gives full credit. You can even replace them with your own MP3 files - just make sure to rename them to exactly what the game uses. It also has a lot of realistic and appropriate sound effects - everything from explosions to the 'bleeps' of menu bar speak highly of the author's skills.

As good as the game is, I have a few minor complaints. First, it has a "difficulty cap" that maximizes the level of difficulty eventually (it seems to be around Phase 9 or 10, although I'm not sure). This means if you are a VERY good typist, you will likely have to quit the game yourself before you die. For most people, though, I think the difficulty is just about right. I asked my brother who is an average typist to try the game, and he dies around Phase 7 or so, which is when things start to get very hectic with tanks shooting at you from every direction and mines running at you :) Another nitpick is that the number of words in each stage could be higher, especially in vocab I & II (the stages with definitions displayed) which I find very educational (I learned a few new words from this game). If users can add their own words, or if the game can import words in simple .txt format, it would have greatly enhanced replay value. Lastly, the game curiously is missing a high score table (or scores of any kind, come to think of it). A high score table would have been nice, so you can brag among friends about who can type fastest :)

Nitpicks/complaints aside, Typogun is a highly polished, professional-quality freeware gem that is easy to learn, hard to master, and addictive after the first few minutes. If you are looking for a fun typing game or just a clever action game, try out this game. Highly recommended! 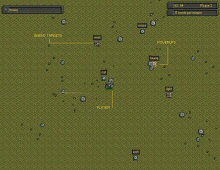