Theatre of The Imagination

Yet another top-notch CD-ROM from Voyager Company, Theatre of the Imagination contains over 5 hours of audio from Orson Welles' "The Mercury Theater," undoubtedly the best "radio drama" program in the 1930s. The CD includes 15 full radio dramas spanning a wide range of themes and periods, from Shakespeare's classic Hamlet to modern thriller The Hitchhiker, and even an episode from The Shadow, one of the Theater's best series based on the popular American comic book series of the same name. All radio dramas have been meticulously restored by a company in San Francisco called Sonic Solution, who used a process called "NoNoise" to digitally remove scratches, pops and clicks of the original tapes, thus restoring the quality of the shows to their original clarity. Each radio drama comes with a complete transcript which you can read on-screen as you listen to the play, although unfortunately the text is not searchable, unlike other Voyager titles.

As in all Voyager titles, Theatre of the Imagination is very easy to navigate and pretty to look at. The main screen consists of an old Philco, with a tuner dial you can click on to switch from one drama to the next. The audio dial controls the volume, and the on/off knob will pause the audio. Four books next to the radio allow easy access to other sections of the CD: Help and credits, Program Notes, Transcripts, and Miscellany. The Miscellany section in particular contains many wonderful extras, including "Back of the Mike," a short film produced in 1937 for Chevrolet that depicts a behind-the-scenes look at the making of a Western radio show. If you want to know how sound effects in radio shows (rain, crackling fire, etc.) were created in the 1930s, here's your chance to find out. Another excellent extra in this section is "Theatre of the Imagination," a 1988 radio special hosted by film critic Leonard Maltin which discusses the life of Orson Welles, the history of the Mercury Theater, featuring interviews with John Houseman and others who worked with Welles on the program. Yet another extra includes a conversation between Welles and famed sci-fi author H.G. Wells a few months after the famous broadcasting of his novel War of the Worlds, which caused mass panic because the script was written and performed so it would sound like a news broadcast about an invasion from Mars, a technique that was presumably intended to heighten the dramatic effect.

By all accounts, Theatre of Imagination is a wonderful CD that is a must-have if you enjoy classic performances - especially by one of the most talented actors of our history. It would have been great to be able to listen to the CD like a regular audio CD, but this absence was probably due to the lack of good audio compression technology in 1995 (before MP3 came of age) rather than oversight. If you have access to a good audio extraction/compression program, you can try "ripping" the audio from program files (all in QuickTime format) to burn them on a real audio CD for your own use :) Highly recommended. 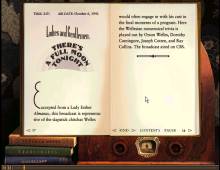 Theatre of The Imagination screenshot