The education is presented in a fun first-person flying simulation. After you are done with choosing a word list, skill level, a helicopter, and a terrain over which to fly, it's off to the game proper. The game will flash a sentence on the top of your screen with one or more missing blanks. Your goal is to maneuver the helicopter to find and capture the letters that will spell out the correct word that fills in those blanks. You must also land the helicopter safely afterwards. You must also avoid attack from enemies, making the game a tad too difficult for younger kids as they must learn how to fly, control speed, change directions, fire bullets and missiles, and avoid attack - all while trying to capture the letters.

The game includes forty lists of ten words each, for a total of 400 words. These are frequently used words that vary in both length and difficulty. One of the best features is that this vocabulary can be expanded: you can create your own word lists, which when added expand the available game vocabulary and upgrade the spelling lists. This makes the game infinitely expandable (although there could be an internal limit somewhere I'm not aware of), and a great way to monitor your kids' progress by gradually adding more difficult words to the game.

Overall, Super Spellicopter is an excellent spelling game that parents should take a look. It is probably too difficult for kids younger than 7-8 years old due to flight controls, but kids in primary school in general should find the game quite enjoyable. It sure beats reading flash cards, at any rate ;) 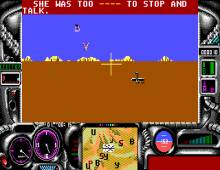