Just as many other kid games, Snoopy's Game Club features a few different games mainly aimed at real small kids. Using the well known Peanuts, Accolade created a product that can be fun for even some older users.

Match images, solve puzzles, find two same images among many similar and such are the games offered. Can be fun for a while.

One of the most underrated preschool edutainment titles ever made, Snoopy's Game Club is a great collection of educational games for kids ages 3-8 designed to foster basic skills such as pattern and spatial recognition and alphabet pronunciation. In addition to excellent graphics and digitized sounds, kids will enjoy hanging out with characters from The Peanuts, one of the world's most beloved cartoons.

There are 3 mini-games in the package. Charlie Brown's Picture Pairs is a typical tile-matching game, with a nice twist: the matching pair will leave the screen in a variety of funny ways, with appropriate sound effects. Snoopy is around to give a clue when players are stuck, and there's even a 2-player competitive option. The second game is Snoopy's Animated Puzzles, my favorite of the bunch. In a nice twist to a traditional jigsaw puzzle, the pieces continue to animate while players solve the puzzle, and completing the puzzle will reveal a funny animated sequence. The last game is Woodstock's Look-Alikes, probably the most difficult for young kids. The objective is to match the exact Look-Alikes in the shortest time. There are 10 rounds of play, each more difficult than the last. The players are only given a maximum of two tries per round. It's fun, but can be frustrating for smaller objects.

Overall, Snoopy's Game Club is a great kid's game with very high production value. Education bits are cleverly blended into the game (e.g. characters pronounce alphabets, observational skills) so that kids won't even realize they are learning while having fun. 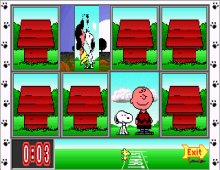 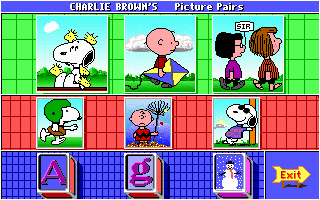