One of the least known Sierra game ever, Mega Math is the last title in short-lived Turbo Learning series. This decent math game stars Quarky and Quaysoo, two spunky aliens from Jeff Tunnell's earlier Turbo Science. The scope of the game is much more limited this time around: kids will learn simple algebra through 3 mini games, and take tests to advance to the next level. The mini games feel a bit redundant because they all teach the same concepts at the same time (e.g. addition), with little gameplay variation (for instance, you press the correct answer on your keyboard in all 3 games. The differences between them are just how the answers and equations are shown). Kids will therefore probably get bored with the games before too long. More gameplay variations (as in Learning Company's Super Solvers: Outnumbered!) would have made Mega Math a stronger and more replayable game. As it is, it's just an okay educational game that's fun for a while, but gets boring once you've seen all the mini games and zany antics of cartoon characters. Turbo Science is much better. 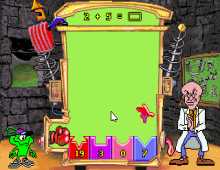