Discoveries of The Deep

Discoveries of The Deep is an okay simulation of deep-sea exploration that suffers from the same syndrome as most Capstone games: great concept but poor execution. The concept in this case is novel enough: your goal is to explore the deepest place on earth: at a spot 320 kilometers south of Guam called "Challenger Deep" at the Marina Trench-- 11 kilometers (7 miles) deep from sea level. In perspective, that's two kilometers deeper than Mount Everest is tall. The game allows you to explore those depths at the helm of a simulated, high-tec minisub. You can undertake any of seven very different missions, from a nuclear waste site cleanup, to searching for new life at the bottom of Romanche Gap, hunting for sunken Spanish galleon, retrieving the "black box" from a drowned airliner, or even see the Titanic first-hand.

Despite these exciting missions, Discoveries of The Deep unfortunately has many flaws that prevents the game from fulfilling its potential. For a start, the user interface is very clumsy, and piloting the ship is extremely simplistic. To add insult to the injury, most graphics in the game are of very poor quality. Although it is true that graphics is not as important as gameplay, in this case the heavily pixellated screens and amateurish graphics make suspension of disbelief very difficult. You can't easily tell objects apart (is that a coral or a fish?), which makes gameplay an exercise in squinting very hard at the screen more than anything else. Although mission objectives are diverse, in effect they amount to the same thing: search for the wreck/airliner/waste site, then click on a few buttons to accomplish your objectives. One redeeming quality of the game is that it allows you to explore the sea at your leisure, although with primitive graphics, you won't be doing it for long.

Overall, it is too bad that Capstone once again botched an original game concept. Anyone looking for an educational title about sealife should go play Odell: Down Under instead, and anyone looking for a realistic treasure-hunting simulation should definitely stick to the superior Sea Rogue from MicroPlay. Not exactly a Real Dog, but also not a Top Dog by a longshot. 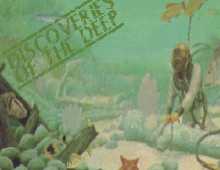 Discoveries of The Deep screenshot