Criterion Goes to the Movies

Among film connoisseurs, the name "Criterion Collection" is synonymous with "quality film releases." Founded by the same founders as Voyager Company, Criterion is dedicated to "...gathering the greatest films from around the world and publishing them in editions that offer the highest technical quality and award-winning, original supplements. Criterion began with a mission to pull the treasures of world cinema out of the film vaults and put them in the hands of collectors. All of the films published under the Criterion banner represent cinema at its finest." Criterion Goes to the Movies offers plenty of information and clips from more than 140 movies in the Criterion Collection of Laserdisc (now DVD) film releases.

With only 140 films or so compared to 15,000 or 20,000 on similar CD-ROMs like Microsoft's popular Cinemania, what does Voyager's CD-ROM offer that others don't? Plenty. To start with, every single movie on this CD-ROM is worth seeing: Criterion doesn't mince words when it claims to focus only on "the world's greatest films." And the breadth of Criterion's focus is immense: classics like Some Like it Hot and King Kong keep company with cult classics like Blade Runner and The Adventures of Baron von Munchausen, as well as popular favorites like Ghostbusters and even a good number of non-Western classics such as Kurosawa's The Seven Samurai. Each entry on the CD-ROM presents detailed information about the film, including full credits, essays, still photographs of leading actors/actresses, as well as excellent filter/index functions (for example, you can view only Criterion releases that won the Oscars, released only in a certain language, and so on). Also included are extras like trailers and production photos - the stuff Criterion is famous for (unfortunately ripped from this download to save our precious server space).

With an excellent sampling of classic and contemporary films from the Criterion Collection and insightful essays and plenty of extras, Criterion Goes to the Movies is undoubtedly one of the finest reference CD-ROMs ever made about any subject. It is no small irony that Voyager Company is no more, but the Criterion Collection -- which was started by the same founders -- is alive and well after more than 17 years in the business. The company is still actively releasing digitized and enhanced versions of many a classic movie, now on DVD, and suffice it to say that if any movie makes it into the Collection, it's something well worth seeing. It's too bad that the Laserdisc releases which are chronicled on this CD-ROM have long been discontinued, but if you own a Laserdisc machine at home, these gems are worth hunting for on EBay. The Criterion version of Blade Runner (which includes rare Sid Mead sketches) and Akira (which incldues a collection of Japanese and English trailers) remain two of my most favorite Laserdiscs in my small collection :) 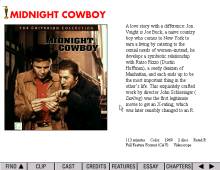 Criterion Goes to the Movies screenshot