Some may be disguisted by the mere existance of this game, but someone's gotta think about little girls' software! That's exactly what this game is, a kiddie product featuring the world's best known doll.

The game features a few small games in it in which a player has to dress Barbie, drive her car around, attend fashion shows and such... If you are 3 years old + a female you'll love this!

One of the very first games designed for young girls, Barbie Super Model is a fun game starring the world's most recognizable doll. The objective is simple: help Barbie become the world's best model. The game is essentially a collection of action games, none of which is particularly innovative, but all appealing to young girls.

There are two main action sequenes: getting Barbie from her house to various places in a car, and helping her post on a catwalk. When Barbie is on the road, the sequence is strikingly similar to Disney's earlier Who Framed Roger Rabbit?, including familiar roadblocks, other cars, and other obstacles. When Barbie gets to the studio, your job is to help her perform on a catwalk. This is a simple memory game: in Barbie's dressing room, you will first be shown a sequence of where she should walk on a real catwalk. You can practice for as long as you want to memorize the sequence, then it's time to choose a dress for Barbie and face the spotlights.

The game is definitely not groundbreaking, although it does an admirable job of keeping girls interested. Hi-Tech Expressions could definitely have leveraged the brand a lot more (e.g. including Barbie's actual doll apparel in her wardrobe), but as it stands, it's not bad. Girls will likely enjoy the "side" features, e.g. choosing clothes for Barbie, more than the actual game.

Well, as a guy i'm not sure what to say...I heard there are some smaller games in this game. Dress up dolls, and drive with barbie's car?! 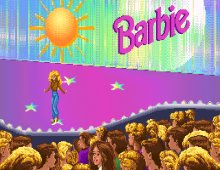 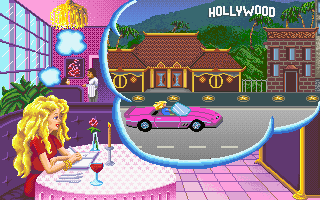