Zap'em is a very lackluster "old skool" shooter from IBM coded in BASIC - one of their most disappointing releases. The description from MobyGames goes as follows: "Zap'em is an action game for one player. You control a spaceship on the left side of the screen which is capable of moving up or down and firing lasers. Coming towards you from the right will be numerous enemy ships. You need to shoot as many of the enemies as you can in order to earn points. While many of the enemy ships take only one shot to destroy, some will require multiple hits and a few will even be ghost ships and can disappear temporarily. Your ship has a limited amount of fuel which will steadily decrease; the game ends when you have no more fuel left." Boring and very repetitive, there is nothing in Zap'em that won't make you miss Defender and other Atari classics afer a while. Not recommended at all, unless you like collecting action games that are made up of only ASCII characters. 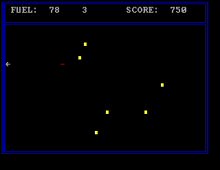