Although not as well-known as Sango Fighter games, Tough Guy has the same charm and excellent gameplay that makes Panda one of the most underrated fighting game companies of all time, let alone in Taiwan. Crisp animation and graphics, many special moves, and diverse locales make this a fun game to play. The only downside is that the characters are too similar to each other. Still, it's a good fighting game no one should pass up. 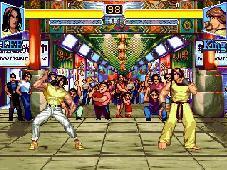