One of OCEAN's earliest flight sims, Top Gun is a simulation of F14 Tomcat, one of the world's most famous modern fighters. The movie license is a mere marketing ploy here, as the game is a straightforward simulation that is rather primitive. Compared to flight sims in the same (archaic) period, Top Gun's flight dynamics are much inferior to, say, Jet, and the action is quite boring because enemy planes are few and far between, and plane cockpit is quite drab in black and white. A game best played for its nostalgic value only-- to see how far we have come :) If you want a good solid sim from the same period, Sid Meier's Solo Flight would fit the bill much better. 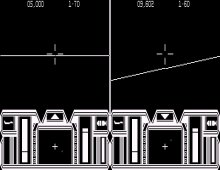