Tombstone City is an excellent fanmade remake of Texas Instrument's oldie of the same name, released at the dawn of desktop PCs in 1981. Your objective is simple: stay alive as long as possible to make the high scores table. You can shoot harmless bushes and monsters, and can get inside blue cages to protect yourself against the monsters. Cages and cactii where monsters are about to appear (in 1-2 seconds) will be brighter than the rest, so you have only a split second to move to a safer place. More monsters appear each day you stay alive, so you have to move fast and shoot faster.

This Windows remake (Linux version available at the official site) is very faithful to the original, down to the simple graphics and unobtrusive interface. The game does not have the same addictive quality as Atari's classics, but it is still captivating enough to glue you to the computer during coffee breaks and make you miss the golden days when games could really sell by virtue of gameplay alone. Recommended! 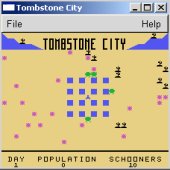