Titan Omega Revelations is a fun, polished, and massive freeware horizontal shooter that went through many versions, each time with more features than the last. This latest incarnation is chock full of many more features than most commercial shooters: you get a decent story that unfolds via cut-scenes, 2-player mode, ability to command your AI-controlled team members, upgradable ships, and 13 huge levels.

The graphics, while still a bit cartoonish like most freeware offerings, is more than adequate and is smoothly animated. The AI for teammates is quite good - in contrast to wingmen in Wing Commander games, they actually *do* make your work easier in this game. There are also many kinds of weapons you can find and buy in the shop, including ship upgrades. The action, as it should be, is fast, furious, and full of big explosions. Ship designs for "boss" enemies could be better, but as a whole they don't detract from the experience. The game may not be the next R-Type, but it gives a lot of bang for zero bucks and is a lot more fun than most amateurish shooters that are being marketed as $10+ shareware. I certainly had a lot of fun with this one, even though my lack of skills prevented me from seeing the final sequence. Highly recommended to SHMUP fans everywhere. 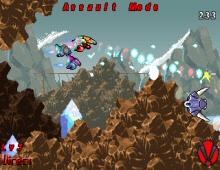