Thunder Blade is a below-average conversion of a SEGA arcade game. Although missing the original's sharp and fluid graphics, this PC version is still a decent shooter without a lot of variety. You get three lives, your helicopter is armed with a cannon and missles, and there are no power-ups. One button shoots your cannon and the other your missles. Move side to side and shoot everything in your path. The cannon is used against other aircraft and the missiles are used to attack ground targets.

There are four stages for a total of 12 rounds. Stages can be displayed from two different views. One is an overhead view and the other is from behind the chopper. The overhead view levels contain more detail and easier to see targets. From behind the helicopter the ground targets are much harder to see. Rear view levels also have players trying to avoid hitting buildings and other objects by flying left/right as well as up/down-- certainly not an easy task. Enemies consist of typical military type craft such as helicopters, fighter planes, and tanks. The aircraft fly different patterns which make them more difficult to avoid. Not all of the enemies shoot at you but they get in the way and will kill you if you make contact. Not one of the enemies is extremely hard to defeat but there are a lot of them on the screen at once raising the challenge. Thunder Blade is also very difficult because you only get three lives and no continues, so it will take some very fast reflexes to survive.

Overall, Thunder Blade is just not a lot of fun to play. The two different views are cool, but all of the levels contain similar enemies. Your weapons are not too interesting either, and the game quickly becomes repetitive. The arcade original was never a smash hit, and this PC version is even worse. 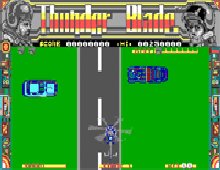