Super Nibbly is a decent and very little known PC conversion of the Commodore 64 and Amiga game of the same name, which were only slightly better known than this PC port. The game is basically the same as classics Snake and Nibbles: you control a snake who grows bigger every time he eats a piece of food in his path. You have to maneuver the snake so that he can keep growing without running into a part of his own body - when that happens, it's game over.

Super Nibbly does not really add anything new to the concept, except a neat twist that combines the gameplay of Pac-Man. In addition to walls that you cannot go through, the game also requires that you eat all food pellets on each level in order to go to the next one. Since food pellets are placed on every square just like in Pac-Man, this effectively forces you to play a game of "trace a complete picture outline without retracing" on every level. Once in a while, the game drops new obstacles to make your job more difficult, such as different kinds of food that makes you grow longer than one notch at a time. All in all, Super Nibbly is a fun Snake clone that should appeal to fans of the classic who want something more challenging. The game gets frustratingly difficult after a few levels, though, and there is not enough variety to keep it interesting for long. 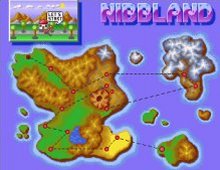