Remember Boulder Dash? Well, that formula has been recreated time after time, and most of the games (Heartlight) were pretty bad, and didn't come near to the original. Now, here's a game which did that.

Supaplex was developed for the Amiga computer and later ported to the PC. The quality of the game did not get lowered, which makes it almost identical to the Amiga version, except for maybe the music and controls.

The goal of the game is to eat all the electrons in the level. Avoid the boulders, because if they fall on your head, well, then you die (kind of like in real life ;). Some levels are easy, some are difficult, and the later levels are horrendously difficult, near to impossible. Boulder Dash-type games always were a mix of using reflexes and creative thinking at thesame time, working together if at all possible. Supaplex is no exception, and therefore you'll have to plan out routes often to make sure you don't die.

In one of the best Boulderdash clones, gameplay in Supaplex is similar to that classic: as Murphy the bug-hunter living inside a computer, you must collect enough infotrons in each level and exit as fast as possible without getting killed. Quick-thinking is required as well as arcade reflexes, as the path to infotrons often involve moving objects and manipulating them. It's a lot of fun, and best of all, it's now freeware thanks to the auspices of Digital Integration, copyright holder and original publisher.

Once upon a time there was a game known as Boulder Dash and it had its clones. Then Digital Integration made Supaplex and from that day on there were no more Boulder Dash clones - there were Supaplex clones...

You control Murphy (the main character, the world's most famous tomato) through hundreds and hundreds of levels, collecting infotrons and evading snik snaks (insane scicors). Murphy seems to be trapped in some kind of computer systems and the only way for him to escape is to collect a set number of infotons on each level before finding the exit door. This might seem like an easy task, but once you get into the game you will see how challenging (and frustrating!) most levels are!

Murphy set new standard to puzzle games. It was not an original game, it didn't bring anything new but it became a classic for just one good reason - it was incredibly fun game to play. And it still is, try it!

Supaplex is one of the best games I played. It is a nice game with more than 100 levels. You have to get some items and get to the end. And make sure you do not die, because of the stones and the scissors and other enimies. 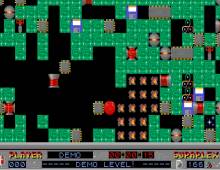 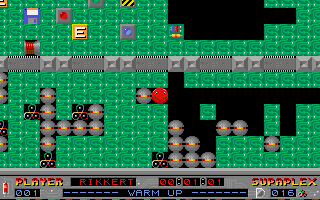