Strike Point: The Hex Missions is a decent 3D action game that is better known on the PlayStation. The banal plot: Hex, an evil corporation, plans to destroy the planet's ecosphere with strategically placed shockwave devices. Your job is to climb on one of three helicopters and eradicate their bases in ten third-person viewed 3D hotspots before it's too late.

Although it may look like a flight simulation at first, SP:THM is actually a 3D shooter - and a good one at that. You have three helicopters to choose from, with the usual differences: one is heavily armored, one is fast, and one is stealthy. One of the best things about the game is that you can start playing on any of the ten "global hotspots" (levels), each of which contains a variety of missions. Although most missions can be completed in just a few minutes of frantic dogfighting, you may lose all three helicopters after the first few missions. Therefore, you are forced to figure out the most efficient way of finishing all missions in a level without losing a chopper, and do it within the alotted time limit. Speaking of time limits: they are rather harsh in this game, and it's game over if you cannot finish a mission in time. Fortunately, the difficulty level is never so overwhelming that you feel it's impossible to win.

Each helicopter is equipped with a limited supply of homing air-to-ground and air-to-air missiles, in addition to unlimited-ammo machine gun. You also have bombs at your disposal. One nice feature is the "land it" option which will lead you back to your helipad (via directional arrows) if you need repairs. Some of the missions require you to pick up Doomsday devices, power-up crates, or survivors from the ground using your "green beam". The graphics are more than decent, offering a diverse array of gourard/texture-mapped terrain, from snowscapes to green hills, cliffs, and valleys. The scrolling and animations are very smooth, and the sky is even detailed: dotted with clouds which can be reflected in the lakes below you. The detail is equally good on the ground: you will find buildings, parked aircraft, tanks, sporadic trees, gun emplacements, jeeps, radar dishes, and even a few homes. The explosions, unfortunately, are a bit on the "cheap" side when compared to these details - they just look like big yellow balls :)

Last but not least, SP:THM has intuitive and responsive controls that support keyboard, mouse, and joystick. It even has a split-screen two-player mode, both head-to-head and co-operative. When all is said and done, this is definitely a fun arcade-ish shooter every arcade fan should take a look. It may not be as atmospheric as Strike Commander, but it is far above the norm. Recommended! 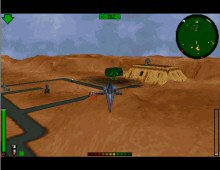