One of the rarest games from IBM, Street Fighting Man is also one of the company's best releases. The game casts you as Nick, a brawny dude who must journey to the rough areas in 5 U.S. cities, ranging from Denver to New York City. Your goal in each is to rescue your girlfriend Xianna from the city's major gang - which naturally requires beating up a lot of people who stand in your way.

In a nice change from the typical side view of other beat 'em up games at that time, Street Fighting Man features a nicely detailed isometric view, with clearly drawn characters that are big enough for you to distinguish their moves. People are not animated as smoothly as Bushido, but still believable. The fun of Street Fighting Man lies in its nonstop action and a great atmosphere. When you approach a new gang's territory, for example, the game tells you whose turf you are on. Each gang has its own attack style and weapons, and some are tougher than others. Like River City Ransom, you can pick up various objects around the screen to use as weapon, although they are not very imaginative, and are hard to come by. If you enjoy beat 'em ups, Street Fighting Man remains one of the best late '80s entries that should keep you entertained. Recommended! 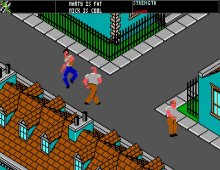