You are Skippy, a little boy who, while riding his bike, is the target of some baddies in their car. They want to score some "roadkill points" (Carmageddon, anyone?), and Skippy is a big bonus. He miraculously survives, but it's crippled now. Filled with rage, he builds a "Deathbuggy", whose main weapon is a mower. Tromaville has a new superhero!

In every level, Skippy has to accomplish one objective. Basically, it's a mow-down-every-baddie- in-sight, but you often have to save innocents. Let the enemies kill them or, worse, mow down too much of them, and you must restart the level. Surely, you'll never get bored: from the Dobermann Rescue to the fight against FrankenHitler, from the Meeting with the Tobacco Man to the final confrontation in Tromaville's Nuclear Plant, every screen has his challenge. Sometimes, Skippy equips the Deathbuggy with some demented weapons and gadgets - the rolled papers launcher is something you must try, at least once in your life ;). True to Bloodlust's fame, every screen will be filled with blood and corpses, and their gory humor is always here - what source is better than Troma's trash movies?

Graphics are nice, but nothing so spectacular. They simply do their job well, especially when it comes to blood spraying everywhere. Luckily, backgrounds aren't static. Grass, benches and other things can be mown down, just to add destruction to your death race :). Cutscenes are nothing to write about (with the exception of the intro), only screenshots from the movie. The speeches are great - we are used to good digitized samples from Bloodlust since the times of Executioners. Controls change often - sometimes it's only moving (mowing?), sometimes shooting, other times shooting with your mouse. Anyway, you'll never lose control. The bad things come when you speak about longevity: the game is short, only sixteen levels, and two are only bonuses with no real challenge. And, worse, it's easy, very easy. Only levels 4, 11 and 14 gave me some problems, but after you master them, you can finish all in less then twenty minutes. Even the final confrontation is too simple, Skippy's razor launcher aims the target automatically! Then, there's no big reason to replay it. Probably for this, there are two mini-games, the "Gang War" for two players and the Painting, but they get old very fast.

A fun game, undoubtedly, but only for a short while. 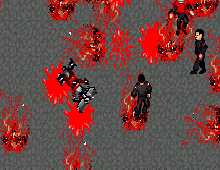