A standard Action/Jump 'n Run-mixture. You got to free hostages and you are armed with an unlimited amount of Shuriken which you throw at your approaching enemies who are trying to stop you. Once per level you can use some ninja-magic. Well, not too great - not unique, but still not bad. Fans of this genre will like the game - others - um... maybe not.

SEGA's popular side-scrolling arcade game converted to the IBM-PC. You slip into the role of Jo-Musashi, a modern ninja who's off to rescue hostages and to kill everything on screen with your shuriken and sword. The PC version of Shinobi has very poor graphics compared to the original arcade game (duh) and suffers from worse playability, but it's a decent action game for PC standards of that time.

The controls in the game are easy to use. One key for attacking, one for jumping, another for ninja magic, etc. There is no time limit in the game, so you can take your time to eliminate one enemy at a time. Hostages are spread out through each level. As they are rescued, Jo-Musashi will have his life meter replenished. Bonus stages, which become available at the end of a level if enough hostages are rescued, are the most difficult part of the game but also arguably the most fun. You view a close platform and a distant one from a first-person perspective. You must throw shurikens at enemy ninjas in an attempt to keep them from reaching the front of the screen. If one of them gets close enough, the stage ends and you don't receive any ninja magic.

Shinobi is not a hard game, but it is not too easy either. Although the level bosses are definitely too simple to defeat, some of the later levels will require precise timing and inhuman reflexes. Overall, Shinobi isn't as varied or atmospheric as the best ninja platformers (e.g. Ninja Gaiden 2 on the consoles), but it does offer more than a few hours of fun gameplay, and the addictive and original bonus levels are well worth playing for. 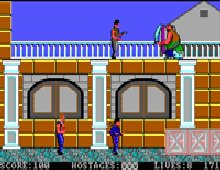 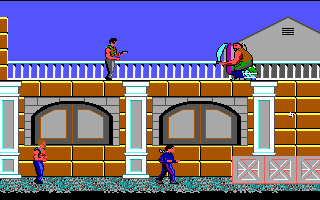