MEEP MEEP! It's Road Runner - your favorite highspeed bird. And what a surprisingly nice game. They kept the basic idea of this game to a minimum. You run from the right side to the left side collecting bird seeds, avoiding cars and of course that ever hungry Wile E. Coyote. Simple concept - but Wile E. got his special ACME gear with him. See him ride one of those typical rockets and you know you're right inside one of those cartoons.

The game got great arcade feeling and is best played with a joystick. Controls are very good I'd say - far better than many games I've played. Really enjoyed this game - and not only because I've always liked Road Runner.

Decent - at best - conversion of Atari's fun arcade hit from 1985 based on the Warner Bros. cartoon series of the same name. You control Road Runner in a race against Wile E. Coyote and his ACME toys. The goal is simple: evade Wile E. Coyote on your way to the exit on each level. Of course, there are many obstacles and distractions scattered around to foil your plan.

To its credit, Mindscape includes many nice touches in the game that fan of the cartoon will be familiar with. Road Runner can eat seeds, for example, which give points as well as replenish his health. If he misses 5 seeds in a row, Road Runner will faint and also lose a life. If Road Runner inadvertently eats a seed that contains iron filling, Wile's magnet may slow him down. As in the TV, there are also ways to get rid of the pesky Wile. If you can lure him into being run over by a truck, you'll score a nice bonus. You can even score a bonus by luring Wile to get close to you, then sprint away and Road Runner will stick out his tongue to taunt Wile, just like in the cartoon.

Overall, I find this conversion of the arcade classic to be up to the task, although controls could be more user-friendly, and graphics could be a bit better. If you've never played the arcade version, you'll still find Road Runner a charming, likable action romp. Arcade fans will likely be disappointed.

This game is weird. From the Cartoon Network series, ya know? Like ehhm, what was it? "meep meep VROOM!" or something. Well, the only goal in this game is to pick up all the games you run into and run away from the wolf.

If you have children that are still interested in old games/abandonware, download it! Else, forget it, well, that's my opinion of course. By the way, this is named a "racing" game, because it's almost similar to a racing game. 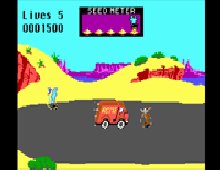 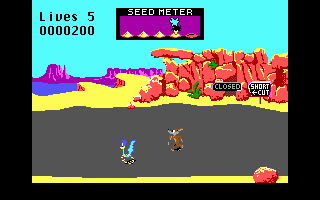