Rapid Assault is a decent first-person futuristic driving game from Synthetic Dimensions, published by IBM. The plot is simple: as member of the futuristic police force, your job is to drive your trusty police vehicle to perform various missions assigned to you. Most of the missions don't stray from the typical and mundane, such as finding markers and various other objects or apprehending a criminal. The action is so-so, with most enemy cars equipped with weapons too weak to pose any real problem to you. The "arena" mode is available for anyone who wants a quick skirmish, but the action here is far too boring and the track too long (and direction arrows too confusing) to hold your attention for long. Overall, Rapid Assault is a dead-average game that doesn't bring anything new to the table, and the gameplay is much less interesting than, say, Quarantine or G-Police. Thumbs down on yet another lackluster PC release from IBM. 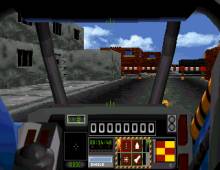