Outer Ridge is a sadly overlooked Asteroids clone that was released as shareware in 1995. Games Domain has the rundown on this old game:

"While it's not Terminal Velocity, or Lemmings 3-D, it's certainly one of the best raytraced action-games I've seen, especially at a ZIP file size of only 969k. It's basically a 3-D cockpit-perspective version of "Asteroids", with *big*, well-raytraced (3D-Studio), metallic-sheened rocks flying in all directions. The "explosion" graphics are better than those in DOOM, and even rival those in ROTT (get the dual cannons in O.R. before you pass judgement here). In addition, the game was designed well enough to run perfectly smoothly; even on slower systems. The game was completely smooth on my 486DX-50, and I can't imagine that it would be much worse on a DX-33. The fast-beating techno soundtrack fits the game perfectly.

The graphics alone make this one worth checking out. If you have any trouble running the game, try booting up with HIMEM/EMM386 rather than QEMM. Outer Ridge is definitely one of the best Asteroids fans :) 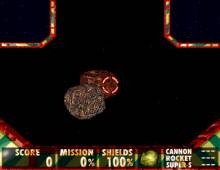