Night Raid is a fun variation of the classic Parachute Drop game of yore in which, manning artillery, you must shoot all enemies that drop from parachutes before they get close enough to you. Simplistic and mostly mindless, but fun. For a better conversion that adds interesting strategy elements, try Three-Sixty Pacific's Armor Alley.

Night Raid is another action shooter and it is similar to a few other games. You control a single gun that you can turn both left and right while shooting as many things as possible. You have to survive a wave of attacks from enemy soldiers dropping from the skies in parachutes. They come from enemy planes and the faster you shoot down the planes the fewer men will appear as well.

After each wave new planes, rockets etc. appear to make it a little harder for you but the game really never gets really hard because there is a very simple tactic that seems to work on any level. Simply hold down the fire key while turning right and then left. This way you will always have bullets in the air that can take down enemies. This also means that planes barely enter the screen before they are hit. The few soldiers that will make it out of the planes will either get hit by the rest of your bullets or from the explosions of the planes. If you are concerned about your score this isn't the tactic to stick to then as you lose one point for each time you shoot so you should only fire if you are sure that you will hit as you otherwise end the game at zero points which isn't a great feeling.

Night Raid is a simple but entertaining action game with simple graphics but well matching sounds. While it won't entertain you for hours it can easily be used to waste/relax for 10 to 20 minutes.

This game is based on the concept of Paratrooper; You play a defensesystem with a large canon. You have to prevent the paratroopers falling out of the planes to enter your base. Of course you also can devastate the planes which are flying from the right to the left or vice versa. The graphics are very ok, though the gameplay is a bit slow. 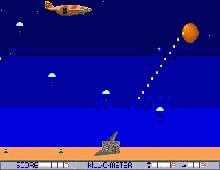 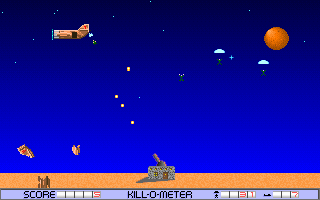