MGT is an oldie isometric view action-adventure by Loriciel in which you control a hovercraft-style vehicle through various rooms filled with many dangers and little puzzles. The type of game that flooded the 8-bit market in the 80's, as 3D shooters do today. MGT was one of the better ones - although the CGA graphics (which are still great) and absence of music make it a worse game compared to the Schneider CPC game I remember. The PC version uses some samples played through the PC speaker. Must have been one of the first games to do that as of 1986. 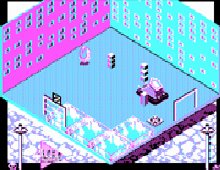