A difficult side-scrolling action game, Metal Mutant is similar to Sierra's Thexder in that it allows you to transform at any time into three different robot forms, each with its own weapons. The range of combat moves and weapon choices are far greater than an average action game, as you can use torpedoes, axes, rope, tooth, and even a remote-controlled flying robot. Although billed as another action/adventure, it's really just an action game, although a very good one. 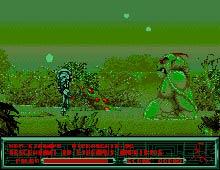