Storm Caliber and Messier are two excellent freeware shooters from Japan. Both games feature fun gameplay, imaginative enemy ship designs, and plenty of cool power-ups to use. The graphics are excellent, although it is sometimes hard to differentiate between different enemies' shots, due to their graphics being quite similar. Both games are more difficult and longer than an average freeware shooter, too, which should make them appeal to joystick experts everywhere. If you prefer vertical shooters, play Storm Caliber first. 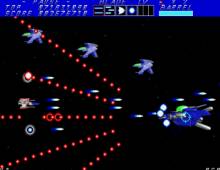