Lethal Tender is a fun, albeit amateurish, first-person shooter from Pie in the Sky, maker of shareware classic Corncob 3D. In this campy Rambo-inspired game, you play beefy hero Nick Hunter, who, in MobyGames's words, "....must thwart the evil Thorne Devereaux's plan to coat U.S. currency with a time delayed explosive by infiltrating his base and mowing down swarms of identical nameless guards."

Lethal Tender plays very similar to Wolfenstein 3D and FPS in general. Shoot guards, collect colored keys to open doors, pick up more powerful weapons—you know the drill. The game does set itself apart from other shareware FPS with the addition of inventory screen, some inventive level design, and some semblance of plot development that is a step above Wolf 3D (a small step, though). Probably one of the better shareware FPS games out there, although lacking the polish to rival commercial games. If you are a diehard FPS fan who can stand below-average graphics and banal enemies, give this one a try. For a much better effort, play the semi-sequel Terminal Terror instead. 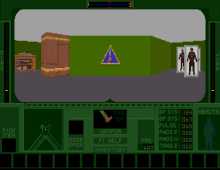 People who downloaded this game have also downloaded:
House of the Dead 2, The, Chex Quest, Privateer 2: The Darkening, CyberMage: Darklight Awakening, Pyrotechnica