King's Valley is a fun platform/maze game from Konami, released for the MSX computer and many other 8-bit console systems - except the PC - in 1985. The game plays like a more updated version of Montezuma's Revenge, except it takes place in pyramids instead of Mayan ruins. As intrepid adventurer, your goal is to collect various gems, while evading angry ghosts and other monsters long enough to find the exit to the next level. Higher levels are both longer and feature new bonus items, such as the pickaxes and other tools you can use. Although not a puzzle game per se (level design is not as devious as, say, Lode Runner), King's Valley does require some thinking to get ahead, especially in later levels where you must figure out the optimal path to get to the gems. Definitely another winner from Konami that will keep you entertained. Recommended! 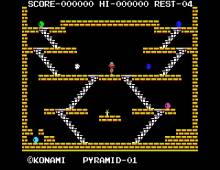 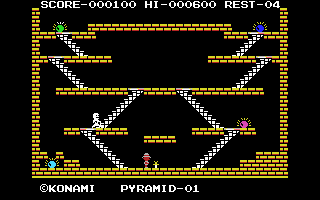